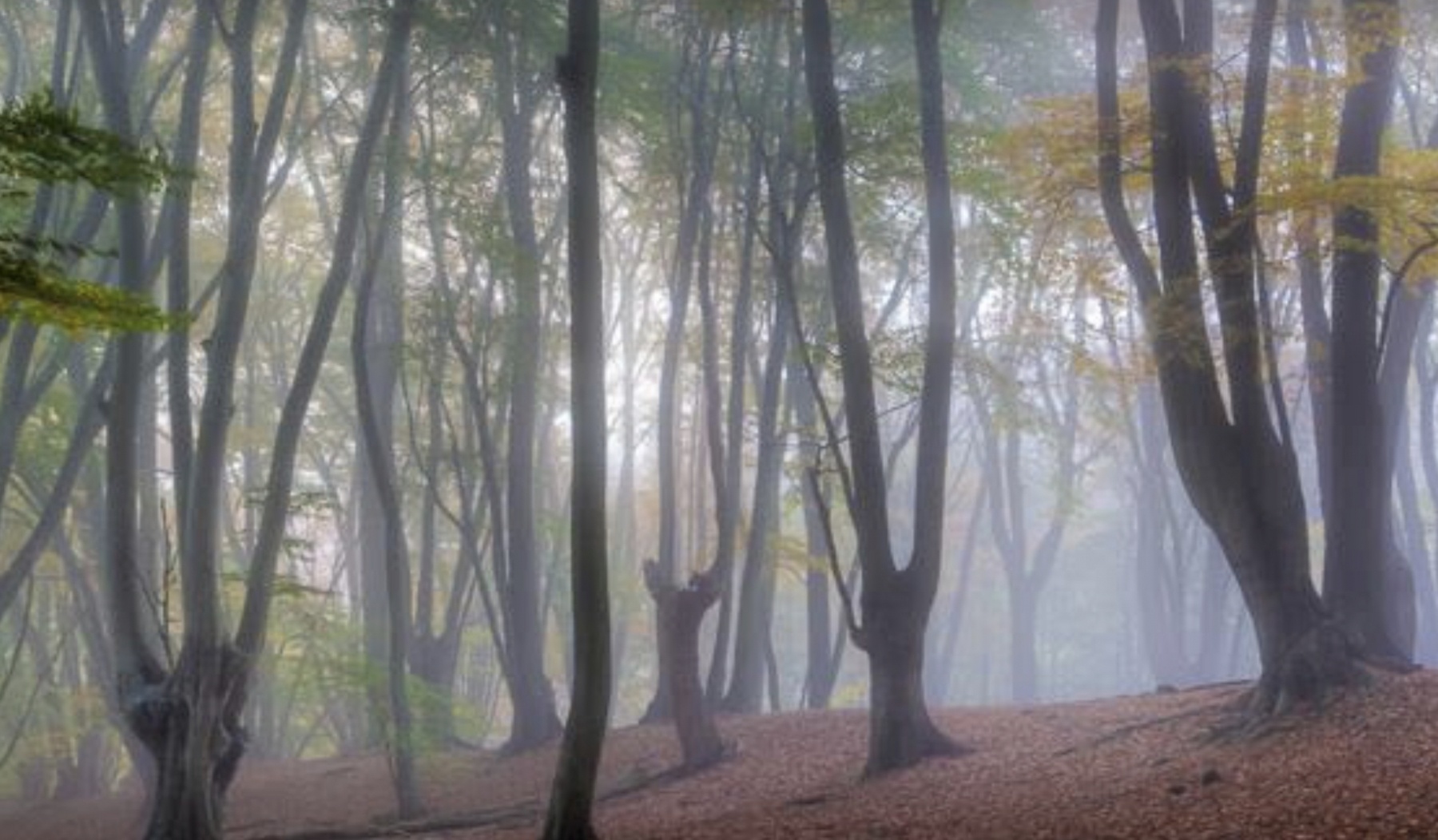 Are you a believer or a sceptic? Either way most people like a legend or two and Epping Forest has its fair share to tell, from Highwaymen to Hangman’s Hill there is a fable or two about most parts of the forest and here we will share some of the popular ones.

The notorious Dick Turpin is rumoured to have had a hideout in Epping Forest. There was a tea rooms in High Beech that claimed to have Turpin’s cave attached to it but also it is said that his cave was in Loughton camps near Kates Cellar.

Turpin is also reported to haunt Traps Hill in Loughton. The name of the road being derived from local people’s fear of being robbed in their sleep and so designed “Turpin Traps” to avoid this. A Turpin trap was installed at the top of the stairs, some boards hinged to flap down once the inhabitants were up that they could bolt down behind them meaning their staircase was secured from any unwanted visitors whilst they slept. A very basic but effective way of keeping intruder out.

Dick Turpin is rumoured to be haunting Traps Hill on his horse Black Bess dragging a woman behind them. One of his reported crimes was that of robbing the Widow Shelley of Traps Hill farm and threatening to roast her over an open fire if she didn’t tell where her wealth was hidden. Her son told them and rather than leaving he and the Gregory Gang stayed and enjoyed some of her wine and food as well as robbing the next door neighbours!

Monkswood, once owned and worked by Stratford Langthorne Abbey is one of the oldest parts of the forest and obviously has its own legends attached to it. The legend of Monkswood of course involves a Monk! and revolves around a beautiful young girl called Lady Iselle who is murdered by the Monk Wilfred who was struck by her beauty and in conflict with all he believes fell in love with her and she him. In a moment of rage at their impossible situation he murders her in the most terrible fashion and then hides her body under the old malisoned tree.

Generations later Ada of Enever who was in the same Wroth family Line and residing at Luckintone Hall (Loughton Hall) was on the eve of St John walking in Monkswood when she passed by a Monk with his head down covered by his habit. When she spoke to him he looked up to speak to her and his face was that of the dead!

Being of pure virtue and of the same line as the murdered maiden this Monk then haunts her in her sleep along with the Lady Iselle and they ask her to forgive this great sin so they may both be at rest, they needed to seek peace and ask her to release their spirits. Ada seeks help from a Dan John who agrees to help her for he has experience in these matters. They go to the malisoned tree at midnight on the eve of St John where hectates gate is opened and they see many unimaginable things and attempts by the devil to drag them into hell. She forgives the Monk Wilfred of his sins on her kin. They spend the whole night there by the tree surrounded by all manner of evil until they wake in the morning.

The two spirits appear to her a few days later once again to thank her for releasing them from their turmoil and pain, they are now released to spend eternity in love.

“ Thereafter is going about and around-The woodland is stirred to its coverts profound, with creaking of clear and clanking of chain the Hellenic come laden with spirts in pain! With flame breathing nostrils, it’s charges obey Apollyon their master and fiendishly neigh. whilst chauntings funereal dolefully rise, with pleadings and wailings and cursing and cries.

The dread cortège halting the maiden anigh, O’er weeping and wailing and cursing and cry, The fiend spake her gleeful “ Though earthling that knee, at midnight has bent to the corpse fruited tree, my wain is well freighted but but yet there is room, Thou Ada of Enever shall arise to thy doom, Hast worshipt at gobbet, at hell garnished shrine, hast homages red moloch, thy soul it is mine!”

” Michael archangel,majestic of might, who warring with Satan did force him to flight, Gret Saboeth captain, that workers Godswill, now save from the fiend that my spirit would spill,

so prayed she, yet scarce twas a prayer but a moan of misery nigh to despondency grown yet scarced was it utters or birthed in the soul than thought-speed it fled, to its haven and goal.

Scourge: Ada of Enever, the legend of Monkswood: E Hardingham 1907

Great Monkswood today is home to some of the oldest Beech Trees in Europe, nestled in it is Loughton Camps an ancient Iron Age Hill fort that local legend states was the site of Boudicca’s defeat to the Roman Empire where 80 thousand men women and children lost their lives to the Roman invaders yet there is no archeological evidence to suggest this is correct and was most probably much further north according to modern historians analysis. It was however recorded in ancient Roman records as the site of one of their marching camps on the way to Watling Street.

This area would have been quite remote at the time of the birth of this legend, long before the Epping New Road was built and neither would Golding’s Hill have been a road so it was a midway point between the small village of Loughton and Waltham Abbey.

Today, whilst not quite so remote it is probably one of the most atmospheric parts of the forest and on a Misty winter’s late afternoon walk or a late midsummers night ramble it is easy to see how these ancient more remote parts of the forest were able to conjure up fear of highwaymen and ancient legends.

Bear in mind though whilst exploring these parts that when you hear the sounds of axes chopping in the distance and the clanking of chains that Lopping ceased well over a hundred years ago and the logs are not dragged down the ancient driveways anymore!!!!

It’s entirely possible that the old malisoned tree is still standing  and maybe waiting for another to open its gates to hell!

Kate of The Hollow: Kates Cellar

who lingers so late in the Hollow by night, in shadow and shade in the mist laden light of star and the cloud cradled moon?
With footsteps so soundless as fall of the flake and visage so pallid as lily in the lake

Or maiden in death seeming swoon.

Her raven black ringlets fall down to her waist, she loiters, she lingers he listens in haste.

she seeks now the Sedge ridden rill. Her eyes they are flaming as fire of the fell, her thin hands are clasping her bosom, the bell, slow booming o’er graveyard and hill.

lays of the forest: E Hardingham.

Today we hear of Kates Cellar and a more recent book attributed this to a hermit or witch that supposedly lived there. However the full legend is much more of a sad love lost story of a young servant girl who had fallen in love with the young Sir Edward from Alderton Hall. She had fallen pregnant by him and ended up drowning herself and her baby daughter in a pool or the stream in the hollow. Alone, ashamed and heartbroken.

Sir Edward marries Alice Lorraine and there is much merriment and celebrations and as time passes they have a child. Come one spring out for a walk in the forest they enter the hollow, their young child was warned to stay close but decided to bend down and take a drink from the babbling stream in Kates hollow, he fell forward to reach the grip of his young half sisters reflection or ghost and was pulled down into the weeds and drowned.

The child was drawn from the water with a smile on his face, no sight of pain or sorrow just looking like he was asleep, a sleep of the dead!

Just off Avey lane at the junction of Pynest Green lane there is  triangle junction known as Hangman’s hill. This one is pretty well known and an attraction for many youngsters once they start driving to visit and try out.

The fable is that a hangman pushes you up the hill. This is complete nonsense however as it is part of the adverse camber of the road that pulls you round and uphill slightly.

More than anything now as these roads are busier than ever it’s probably more dangerous to stop and turn your lights off at night to try it and all your likely to do is wind up nearby residents!

This legend of an pure white stag being seen in the forest is supposedly an omen of death or trouble for those that see it. If one was to happen across a pure white hart it would most likely be a magical joyous moment I would expect rather than one to be feared as any chance sightings of antler crowned creatures to me is usually one of awe and wonderment than that of fear and reservation.

You wouldn’t be in England if there wasn’t a Black Shuck legend around you. It is fairly well entrenched in folklore and numerous sightings have been seen all over Essex over the years. A ghostly dog, unusually large with fiery eyes that some claim is an omen of bad luck and some just a devilish companion. High Beech area is the most reputed part for sightings of Old shuck.

Headless biker, horseless carriage, grey figures of various shapes and sizes and black shadow people are all reported as being seen over the years along the Epping New Road between the Robin Hood and the Wakes arms.

The main thing to look out for however when driving along forest roads especially at night isn’t ghosts and spooks, strange lights or shadows it is Deer!
any encounter to the unwitting driver is much more likely to be that of a deer crossing its forest of which the roads divide and if your not paying attention one of you is more than likely to meet their maker so beware!