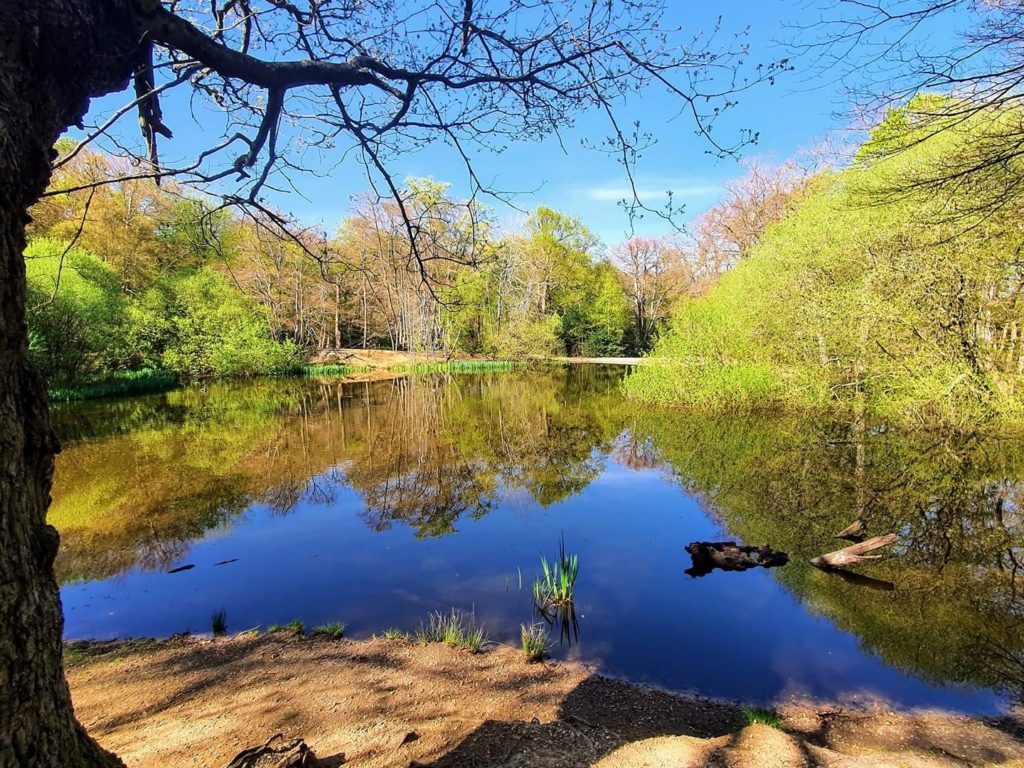 Sitting at the top of Bellringers Hollow uphill from Baldwins Hill pond there is a beautiful pond encircled by some of the oldest beech pollards and coppards in the forest, possibly even in Europe! One of the Beeches is estimated to be circa 1000 years old!

This brute of a tree is probably one of the most familiar trees in the forest for many people. It would have been standing even when King John signed the Magna Carta and forest charter!

It really puts the forest timescale into perspective and is amazing that a millennia on it still sits guard at the top of the hill today. A perfect example of how different “Tree time” and human lifetimes are. 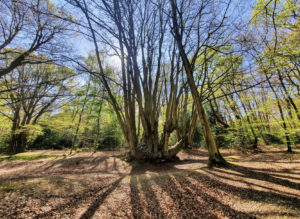 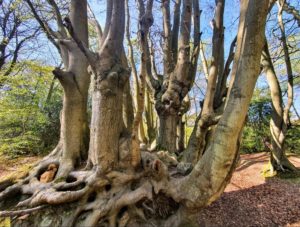 The official name for the old gravel extraction pit here is Blackwier pond but everyone knows it locally as “the lost pond” and sometimes the suicide pool. It is an example of what nature can make out of mans influence on the landscape if left alone to do so, the forest has gravel deposits and this is one place where some was extracted to be used in Loughton. All these years on the forest has turned it into a beautiful natural spot favoured by many.

Heading out uphill from Baldwins Hill in Loughton you walk past Baldwins Hill pond and carry on up clay ride which is a very steep walk. You can either walk up to the top and turn right into the forest at the bridle path cross roads or venture off to the right as you go uphill and wander through Bellringers Hollow and gradually make your way up to the lost pond.

The lost pond’s other lesser known local name which is the “suicide pool” derived from a local story about a lovestruck young couple who are rumoured to have ended their lives there following the discovery of their relationship by the girls father, I think this is more of a romantic story than anything else.

Either way the area is incredibly atmospheric, its hard not to feel an appreciation for the beauty of nature and the forest in this secluded spot. The ambience changes through the seasons and its probably its most beautiful on midsummers day but at its most atmospheric around the winter solstice. On a cold winters afternoon when no one is about you almost feel like your intruding and it shouldn’t be disturbed.

Personally this part of the forest holds a special place in my heart, as a child my father and grandfather walked my sister and myself up to the “jumping tree” which was our name for the old Beech and my Dad would pile up leaves for us to jump out of its branches into his arms or the muddy hollows around it, as I grew older and used to jump my back fence to disappear off into the forest Lost pond and Great Monkswood was always where I was headed. Now as father myself I have taken my children there when they were young to jump out of the tree into my arms and play around in the fallen autumnal leaves, for me it’s part of a visual measurement of the circle of life and for the grand old Beech, living in its  own tree time we are all just a momentary blip, yet for us is a generational cycle where the love of the wild woods was passed onto me and I can pass it on down, to my children and hopefully one day grandchildren.

It is in this part of the forest that I feel a strong sense of responsibility and can visually see the empirical evidence of the effects of man on nature. It is part of the Epping Forest SAC and is heavily protected yet as passionate as I am about the peoples forest and our rights to access this ancient woodland it has visibly and measurably deteriorated in my lifetime.

As a young lad one of the first senses that are awakened when you enter the woods is the sense of smell, next the softness underfoot off the moss and leaf matter that cloaks the forest floor. Both go hand in hand as the smell is predominately the soil and moulding leaf matter yet now you have to move deeper on into Great Monkswood to get more of a sense and feel of the undisturbed forest.The floor is almost polished now around lost pond and the slopes of Bellringers hollow. There are many various reasons for this but mainly its just the amount of use that the area receives. Desire line paths have merged into bigger walkways and now the whole floor is solid and literally the forest here has lost the spring in its step.

Ground compaction is a big issue in the forest world, once compacted it is virtually irreversible. Water and nutrients struggle to permeate the surface and in a location such as this you can see rainfall literally running downhill rather than soaking into soft ground. The ancient pollards that make up the treescape in this area are starting to show the signs of damage, many falling over to rather embarrassingly expose their very shallow and dry root-balls. Part of the reason for the toppling of these old guardians is due to the efforts to save the forest as a whole, locals knew how to manage the forest and work it traditionally. Lopping and working the forest kept it healthy and as proven, the ancient working practices once used extends the lifetime of these trees dramatically. The forest canopy is probably 20 feet plus higher now than it once was when it was worked and the trees literally cant support the weight of their own limbs now.

With regards to the tree canopy some of you may remember the old air raid precaution look out tree at lost pond where during the blitz early warning posts in the area were set up and being the highest point around one of the trees was used as such. I used to climb up the rungs banged into the sides of the tree as a young boy and worked up the courage eventually to get to the top to look out at the view. Sadly it has long since been felled, the blitz a distant memory for very few people nowadays. Periodically the air raid siren was tested at Loughton Police station and I can remember being up the tree and hearing it in the back ground. I could imagine the sense of fear that would have generated hearing that sound and watching the bombers coming over. The first bombs of the blitz landed just downhill from here in Loughton.

There are plenty of other scars from that era dotted about in this part of the forest, bomb craters are everywhere forming little pools in the mid winter months again as a young boy a little further away from here along Golding’s hill an old WW2 plane crash site was discovered, the plane mostly buried into earth, a few summers of crashed plane searching ensued for myself and a few friends.

In this one small spot you can if your lucky sit in silence and watch the deer wander past, sit and view a living view timescale from ancient woodland farming practices, WW2 bomb craters, the gravel pit pond made from local demand all turned back in to something beautiful and serene all under the watchful eye of the big old beech quietly keeping guard.

If you have the patience and can sit for long enough and quietly enough here then the forest will come to you in this spot. Mother nature is a shy creature and she can be coy with sharing her secrets but this is one of her talking spots and when you have seen the deers take a sip of the water, the heron take a fish, watched the buzzards circle overhead all under the shade of a thousand year old tree you can begin to understand the rhythm of the forest and its interlinking circles of life all running at different paces and sadly all subject to the decisions and actions of the threat they all face: us

It is our collective responsibility