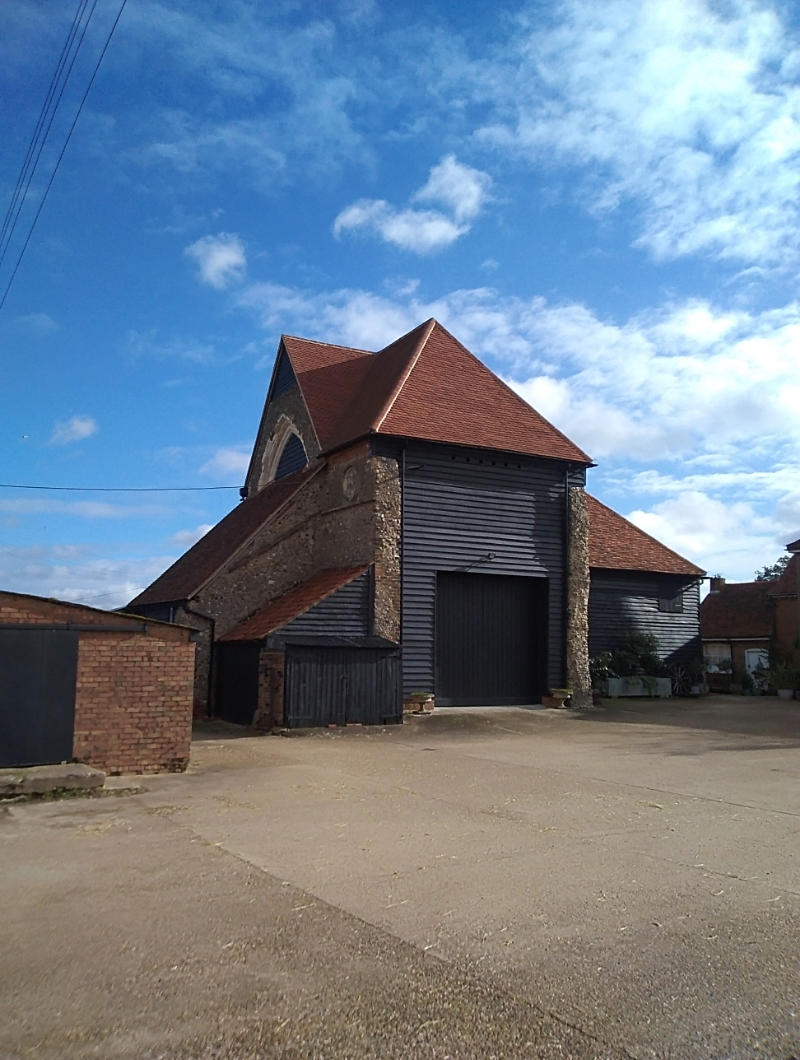 Situated in the centre of what is now Latton Priory Farm at the furthest edge of the Uplands beyond the source of Cobbins Brook & south west of the M11 Hastingwood interchange is Latton Priory, an incredible surviver from a bygone era. I had researched this site and seen pictures but never been there in person & had been planning a visit.

The Priory was built in the 12th century & rebuilt in the 14th century. The heart of the church building remains and has been rather curiously incorporated into farm buildings. This was a self sufficient moated community which at the time was in a remote field. The Augustinian Monks living here had connections to the original Monastery at Waltham Abbey, which now lies in ruins in the Abbey gardens.

The ancient footpaths i often refer to such as Epping Long Green, Galley Hill Green & Claygate Lane were the very pathways the Latton Priory monks used to get to and from Waltham Abbey in the 12th century. I often wonder the stories these pathways could tell about the people who walked them hundreds of years ago. Who were they? Where were they going? What were their lives like?

Back here in October 2020 as i arrive in Epping my life is a bit cold and wet, it’s also a bit muddy. But as i start my search through the fields to find the Priory, none of that matters. I have waterproofs in my bag if i need them & a decent pair of walking boots. Also enough food and water for the walk plus my trusty OS maps, without which I would quite literally be lost.

As i walk along Lindsey Street just past the Council offices it isn’t long before i get my first views across the Uplands with the familiar Rye Hill water tower in the distance like an overweight lighthouse. I take a footpath just past the oddly named Bolt Cellar Lane on the opposite side of the road which takes me diagonally through the fields across Cobbins Brook to Upland Road. Turning right onto Upland Road i then turn left up a lane that takes me through Marles Farm. From here i follow the footpath bearing right through the fields towards Rye Hill Road.

I exit through a gap in the hedge between Whipps Cottage & Rose Cottage turning right onto Rye Hill Road and then turn left up a Bridleway next to Rivetts Farm. As soon as i enter this path i know it’s an old one. You can usually tell as soon as you set foot on one, the hedges lining them tend to be taller, denser & more impenetrable forming a tunnel. I found myself thinking of the Monks. Did they use this pathway? It’s obvious to me that it is an ancient pathway. I stop to check my route & can see i am not far from my destination.

As i continue on this path, through a gap in the hedge i get the first tantalising glimpse of a tall red slated roof looming above some farm warehouses. I instantly think it must be the Priory, but it seems far too tall in relation to the farm buildings around it. I carry on north where the tunnel like footpath opens up to an open grassy path where the OS map tells me to turn right – and ahead of me peering from above the barns a building with a red slated roof that just doesn’t fit in with its neighbours. There’s nothing else it can be, this is Latton Priory.

As i reach the warehouses the building I’ve been following disappears from site and i find myself walking through a compound surrounded by lorries distributing catering supplies from one of the barns, now I’m wondering if i took a wrong turn. I walk through this compound and then as i look to my right there it is. Unmistakable. Latton Priory, towering over the large red brick farmhouse beside it. This isn’t what i was expecting. I was expecting a much smaller building but this is imposing and can be seen from a long distance.

The building is beautiful, a living relic. The ruin has been incorporated into farm buildings many years ago to create a cow shed but now stands empty. I’ve included a stock photo of the inside showing the timber frame work. I wanted so desperately to look inside but every door is secured so i make do with taking as many pictures as possible from the outside. The scale surprises me, i just wasn’t expecting such a tall structure. The ancient craft work on the outer buttresses is amazing & intricate and looking up at the external walls the detail of the arched windows partly covered up is stunning. My love of old buildings has been well and truly satisfied today with this beautiful find.

I spend as much time as i can taking pictures from various angles to try and get the best views before continuing on the footpath running behind the farmhouse. It’s not until later i discover that the ditch i walked around behind the farmhouse was actually the only surviving part of the medieval moat which went around the Priory. Part of a pond used as a fishery by the Monks also survives just south of the Priory.

This is a fascinating site and all my research didn’t prepare me for the reality. The size of the building still strikes me. As i walk along the edge of the fields parallel with London Road on my way back to Rye Hill i look back over my shoulder and see the Priory still standing tall over the farm buildings looking straight back at me. I cross over Upland road and continue south through the fields behind Thornwood Common and can soon see Wintry Wood to my left, so i know I’m getting nearer to Epping. Eventually continuing south east through the fields i find a style beside Wintry Park House which takes me out onto the High Road, where i walk down Hemnall Street back to the station. Today was a good day. This is one walk i am going to remember for a very long time.

The Priory is a Scheduled Ancient Monument, as is the ground for several metres around it. It is also listed along with the farmhouse beside it which is believed to have been built on the site of the old Refectory. It is miraculous that so much remains above ground in such remarkable condition, but much more exists below the ground. Archiological digs have revealed previously unknown earthworks and structures linked to the Priory and a burial ground where Canons were laid to rest has also been located at the site.

This truly is an amazing site and there is no doubt there will be large amounts of earthworks and artifacts still buried. Historic England gives some fascinating insights into what life was like at Latton Priory & is well worth having a read.

The reason i wanted to see the Priory in it’s current surroundings is because soon the land around it will change forever. Over the next few years, just metres from the Priory site will be the boundary of a sprawling housing estate.

The upcoming Latton Priory estate is within the Epping Forest District and will deliver over 2,000 new homes. This will eat up a huge swathe of farmland from the footpath going past the Priory, going all the way back to the edge of Rye Hill Common in Harlow at the rear of the Berecroft Estate. I’ve included a map showing the red outline of the proposed estate with the yellow outline of the Priory site to give an idea of the sheer scale of the farmland which will be lost. There is little doubt the footpaths i used today will be rerouted as some go directly through the middle of the proposed housing estate.

I can’t help but feel a little sadness that such a sacred site as Latton Priory will find itself on the edge of a huge housing estate after spending hundreds of years isolated in a field the middle of nowhere, but i am so happy i decided to include it on one of my walks. There are 2 different routes for this walk. You can either start and end at Epping Green or at Epping High Street, I’ve included both. Without doubt i will be returning as the route taken today will be a beautiful summer walk and it will definately be on my list for a return visit. As always, photos never do justice for a building this special but i hope I’ve managed to capture a piece of the ancient history i visited today & convey what a very special site this is. 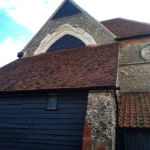 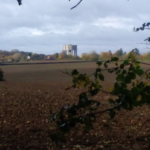 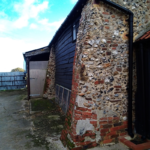 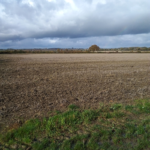 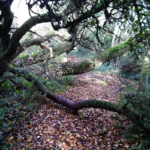 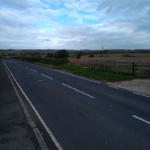 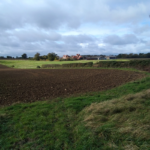 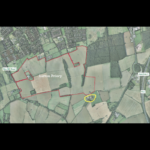 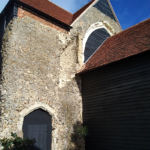 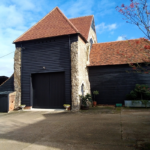 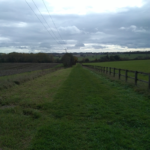 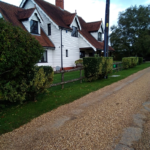 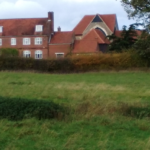 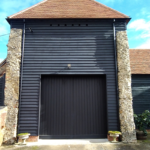 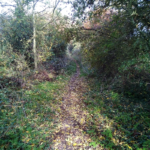 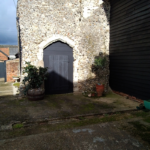 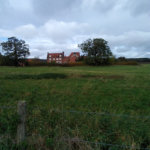 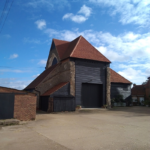 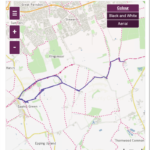 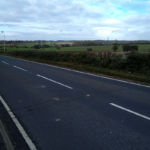 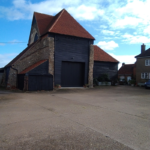 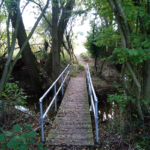 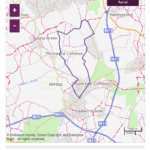 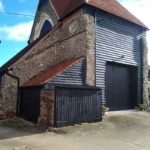 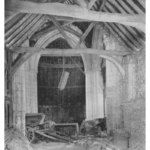 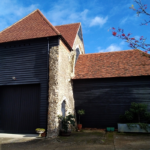 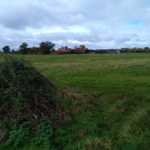 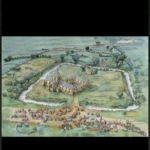