Again, these are new footpaths I’ve not done before, which give a different perspective of the view along the side of Epping Uplands looking south on the way down to the Stort Valley which are stunning & as i leave the bridleways temporarily i find some of the country lanes here are familiar from my childhood in Harlow and bring memories flooding back to me.

As i cross the junction of Tylers Cross, in my mind i see a 10 year old me frantically pedalling past on my pushbike with the goldfish I’ve just bought from the nursery tied in a bag to the handlebars still wondering what my mum will say when she finds out what i just spent my pocket money on. I notice the buzzing of insect activity that accompanied me all summer strangely absent apart from the odd bumble bee & a single butterfly as the hedgerows now fall silent around me. The sounds of summer replaced with the rich visuals of autumn, fruit bursting forth everywhere i look from the hedges and a hint of autumn colour just starting to reveal itself.

There are clues that some of the bridlepaths here are clearly very old ones, possibly hundreds of years old, particularly the one linking Nazeing old village with Roydon. As i exit one of these paths into a field i find numerous wartime bunkers arranged in circles facing eachother. Clearly this was a very active place for military personnel in the war with it’s close proximity to the river lea & the munitions factories down river.

Deer tracks are branching off everywhere, scattered flocks of swallows swoop overhead on the slopes above the beautifully peaceful Stort Valley below, catching their final meals before preparing for the long flight home & the delicious perfume of fermenting crab apples punctuates the mature hedgerows periodically and stops me in my tracks. The starlings gather earlier now to roost and the crows start forming much tighter but noisier family groups, in the distance i hear the familiar call of a Buzzard riding the last of the thermals up the valley.

The view across the Stort Valley from the high ground along the Stort Valley Way is notably different to that of the Lea Valley in that it is so much greener. The Stort at this point does not appear nearly as industrialised as the river Lea, apart from the salad growers greenhouses at the bottom of the hills with sunlight glinting from the glass roofs.

This is very much an autumn walk today & a nostalgic one being so close to the place i grew up and the childhood i have such fond memories of, playing in these fields where nothing mattered and summer lasted forever. I almost feel a little sad as i end this beautiful, memorable walk. 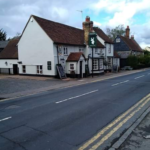